New life begins in Farvardin or Spring with the singularity. After the six months it is made into a reality by the Good Deed of Shahrivar or Virgo.

On the seventh month, the identity has to learn to share with other identities, in order to increase or become more.

The singular becomes more. But the operation or the operator is what makes it more.

The two will be balanced and as such Libra is created in Latin.

We become a social being as we respect the law that binds us all.

The Ahuramazdans pronounced the Mehr Yasht in the Zend-Avesta orally from 20,000 years ago when they entered the Iranian Plateau from Africa:

"Like all texts of the Avesta, the Mihr Yašt belongs to an oral cul­ture of ritual poetry whose roots reach back to the prehistoric Indo-Iranian civilization. The god praised in this hymn—miθra-, whose Vedic cognate is mitrá-—is inherited from the Proto-Indo-Iranian culture, in which Mitra emerged as a deity embodying the notion of ‛contract.’ "

This is one of the oldest oral and written documents we share with the people of India.

"Although in the Rigveda only one hymn (RV 3.59) is dedicated to him alone, he frequently appears coupled with other gods, and especially the deity Varuṇa, with whom his name forms the dvandva compound mitráváruṇā “Mitra and Varuṇa,” a pair of gods praised in several hymns. The Avestan equivalents of the compound are the dvandvas miθra.ahura (Yt. 10.113, 145) and ahura.miθra (Y. 1.11, 2.11), with ahura re­placing váruṇa- in the Vedic compound. The earliest attestation of the names Mitra and Varuṇa is an oath formula in a 14th century BCE treaty between the Hittite and Mitanni kings (Kuzmina, 2007, p. 133)."

The Ahuramazdans that wrote Mehr Yashts, did not allow it to be written for thousands of years, in case the purity and soul of the words would not be felt. It was pronounced and handed down "seeneh be seeneh" (chest to chest). All Ahuramazdans sang it and as such knew it.

Some of the very basic Ahuramazdan concepts of law and order, that formed the foundation of modern society, were derived from Mithraism, that eventually became Christianity itself.

The planet that rules Mehr and the 7th House is Venus. It's job is to unite. It's exhalted in its ability to reconcile everthing. It teaches us to be humble to Ahuramazda. This concept is the oldest in our Indo-European heritage and it is found in the Holy Rigveda of India.

Cultural unity based on humility and law was cultivated and affirmed by Ahuramazdan Cyrus the Great, as written in Cyropaedia of Xenophon. Later he produced the Declaration of Human Rights:

"I took up my lordly abode in the royal palace amidst rejoicing and happiness. Marduk, the great lord, /established as his fate or me a magnanimous heart of one who loves Babylon, and I daily attended to his worship."

"My vast army marched into Babylon in peace; I did not permit anyone to frighten the people of [Sumer] /and\ Akkad"

"I relieved their weariness and freed them from their service."

The peace and love of Ahuramazdan Cyrus the Great was preserved in the Old Testament.

"Cyrus is mentioned some twenty-three times in the literature of the Old Testament. Isaiah refers to Cyrus as Jehovah’s “shepherd,” the Lord’s “anointed,” who was providentially appointed to facilitate the divine plan. God would lead this monarch to “subdue nations” and “open doors” (an allusion to the Jews’ release from Babylonian captivity). He would make “rough places smooth,” i.e., accommodate the Hebrews’ return to their Palestinean homeland. He would ultimately be responsible for the rebuilding of Jerusalem and the reconstruction of the temple." 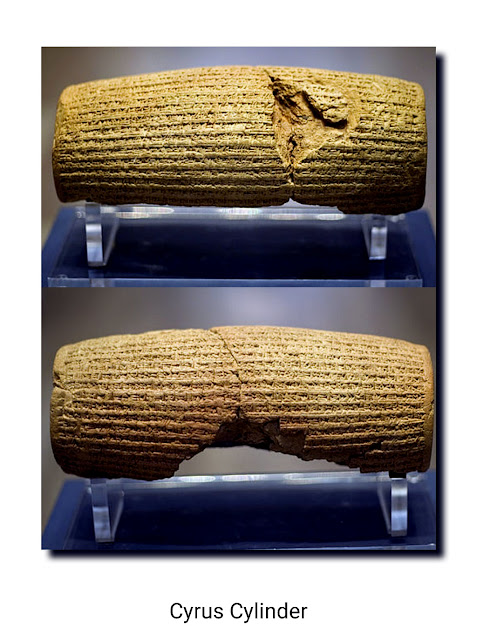