(Hey Ali, you are an astrologer, tell me when I will get wealthly?)

This is the typical question you get as an Astrologer.

And I start with the following:

The ancients of Iran, the Ahuramazdans, looked at the universe, and noticed the constellation Ordibehesht (Taurus), in all its mighty.

And I get immediately interrupted:

(What's all this rubbish man, tell me what's going to happen?).

And that is where it all goes wrong. Basically, the individual does not want to understand, the premise of my explanation.

They want an answer to their future, just like a SatNav, gives them directions on where they need to go, if they were driving. They don't want to know the geography.

Astrology is a space-time map. When you connect to your position in your space-time, you know where you are relative to any aspect of life.

When it comes to wealth and material prosperity, it is Ordibehesht.  But you need to appreciate the spiritual context to connect to it.

So they get hit back by me:

Having said that, the ones who appreciate the ancient history, do get luckier than most. Somehow the Achaemenid art form gets into their spirit, and they think materialistically.

"In the Achaemenid calendar the second month is called “thūra.vāhara,” month of vigorous spring/growth. It should be added that in the third line of Yasna 48.6 of the poetic gathas, it is ashá vahishtá/artá vahishtá or the “artistic creativity/true essence of ahurmazd” that causes plants to grow vigorously."

Many Iranians look at the period, when Iran was benefiting from Ordibehesht energy, and are awe struck by the architecture, without really knowing the nitty-gritty that is going on to the life journey.

The ancients of that Age of Taurus, knew what they were doing, when they created those designs. They knew that the new born will have to be subliminally, or intuitively linked to materialism.

This intuitive connection is easily done with Ordibehesht, as Venus its ruler is exhalted in Esfand (Pisces) or the 12th House. As I write this the Moon is approaching the 12th House of intution.

At this point, the Iranians normally outwit me, and say:

The whole purpose of an Ahuramazdan is to see the Good Deeds of his words and thoughts. Life has to be appreciated and productive. It is as simple as that.

But the Ahuramazdans, knew that there will be times, when Iran will be unproductive and fall by the way side. They constructed, in out of reach places art forms, that will bear the materialistic message of Ordibehesht, and help Iranians be creative in their lives.

To show how accurate Iranian Astrology is, you need to look at Persepolis. As Ordibehesht is about measurement, Ahuramazdans created a massive clock that would accurately predict the seasons. 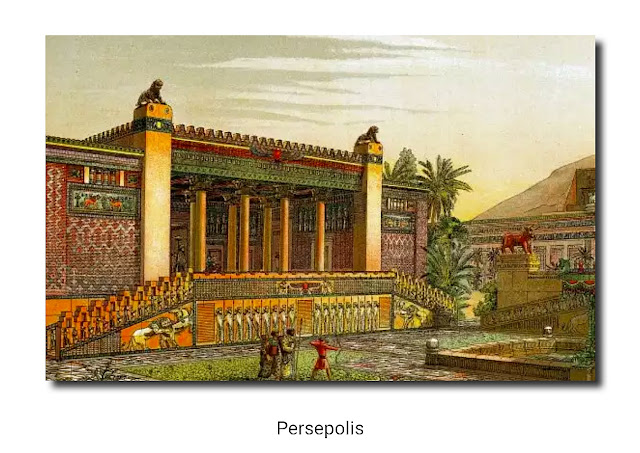